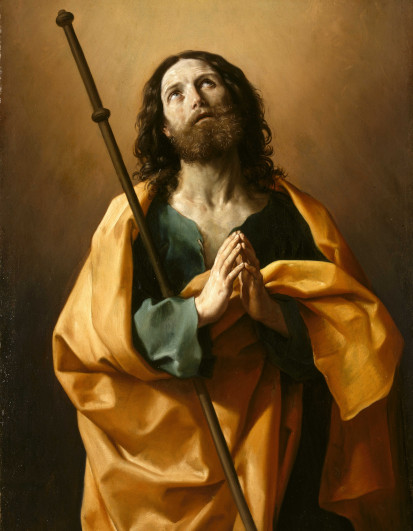 According to the New Testament, James the Great, also known as James son of Zebedee or Saint James the Greater, was one of Jesus’ Twelve Apostles and part of His inner circle.

One of the James Facts is that according to Catholic tradition, Apostle James spread Christianity in Spain.

He was beheaded in Jerusalem in 44, and his remains were later transported to Galicia in a stone boat to the site of Santiago de Compostela Cathedral.

Patron saints are not unique to Roman Catholicism, but also to Eastern Orthodoxy, Anglicanism, and some branches of Islam.

The patron saint of pilgrims and Spain is St James the Greater, Son of Zebedee.

St James the Greater was one of Jesus Christ’s disciples and was thought to be his cousin by the Virgin Mary’s sister, and the brother of St Jude Thaddeus.

He shared a fishing boat with his brother John, his father Zebedee, and his partner Simon. John and James were disciples of John the Baptist and, later, of Jesus.

When Jesus called James and his brother John to be “fishers of men,” they left their lives as fishermen. He was one of Jesus’ disciples until he was crucified by the Romans.

According to Christian myth, James was born in Galilee around the year 5 BC. His parents appear to have been well-to-do. His father, Zebedee, was a Sea of Galilee fisherman who probably lived in or near Bethsaida, possibly in Capharnaum, and had some boatmen or hired men.

His mother, Salome, was one of the pious women who later followed Christ and “ministered to him of their substance.”

His brother was John the Apostle, who, according to Christian tradition, was the only Apostle who did not die as a martyr and is the author of several New Testament books. According to the Church Fathers, his brother is the same person as John the Evangelist, John of Patmos, and the Beloved Disciple.

Because of their impulsive personalities, both brothers were nicknamed “Boanerges” (“Sons of Thunder”) and were among the first disciples to join Jesus Christ.

According to the Synoptic Gospels, James and John were in a boat with their father mending their nets when Jesus called them to follow him.

James was one of the chosen three who witnessed the Transfiguration (metamorphosis), the resurrected daughter of Jairus, and the agony in Gethsemani.

St James, or St Lago as it is spelled in Spanish, is also the great military patron of Spain. However, his mission to defend the Christian Church against invaders was postponed until after his death.

During the famous battle of Clavijo, he appeared unexpectedly on a milk-white charger, waving a white standard and leading the Christians to victory.

This manifestation occurred in response to the soldiers’ use of his name as the battle cry on that particular day, “Sant lago!” As a result, the ancient city of Santiago was named after him, and the cathedral was built in his honor.

They were discovering that the greatest calling of a Jesus follower is to serve others. Following Jesus Christ can lead to adversity, persecution, and even death, but the reward is eternal life with him in heaven.

An apocryphal text known as The Gospel of the Twelve suggested in the first century that when the Holy Spirit descended on the apostles at Pentecost (Acts 2), they were each empowered to speak the language of the people they were called to reach (like the Tower of Babel, but in reverse). James spoke Latin, which was primarily spoken in the Roman Empire’s western half.

However, it wasn’t until hundreds of years later that someone suggested James travel to Spain.

A text known as the Breviary of the Apostles, written in the sixth century, claimed that James spread the gospel to Spain and was buried somewhere near the sea, west of Spain.

This assertion was repeated in poems, hymns, biographies, and commentaries in the seventh and eighth centuries. In the early ninth century, a bright star is said to have guided a shepherd to Saint James’ tomb in Galicia, in what is now known as Santiago de Compostela.

To accomplish this, James would have had to leave Jerusalem to evangelize Spain, then return to Jerusalem to be executed in 44 AD, and then have his remains transported back to Spain to be buried.

At the time, this legend was widely accepted, and the burial site became one of the most popular Christian pilgrimages. However, most modern scholars have found little evidence to support James’ ministry in Spain or his alleged burial there.

Even Paul makes it appear less credible. In Romans 15, he says,

“It has always been my ambition to preach the gospel where Christ was unknown so that I would not be building on someone else’s foundation” (Romans 15:20),

Nobody has taken the gospel to Spain, but it would be strange for Paul to say,

“I prefer to go where nobody has spread the gospel before, which is why I’m going where James went.”

The majority of scholars believe James never made it to Spain. He died in Jerusalem, early in the Christian movement. This Spanish missionary journey was not mentioned again until the sixth century, and the discovery of his burial site was simply too fantastical. Despite its mythical origins, this pilgrimage, known as the Camino de Santiago, has remained popular to this day.

James was one of the apostles who sought power and authority over the others, which Jesus chastised:

“And Zebedee’s sons, James and John, come to him, saying, “Master, we would that thou shouldest do for us whatever we shall desire.” And he said to them, “What do you want me to do for you?” They said to him, “Grant us a seat in thy glory, one on thy right hand, and the other on thy left.”

Jesus uses this occasion to reiterate his lesson about how a person who wants to be “great” in God’s kingdom must learn to be the “least” here on earth, serving all others and putting their needs and desires ahead of one’s own.

Not only are James and John chastised for seeking their glory, but the rest of the disciples are also chastised for being jealous of this.

This is one of the few times in the Bible when Jesus is quoted as having a lot to say about political power. He focuses on religious issues the majority of the time. In chapter 8, he warned against being tempted by the “leaven of the Pharisees…and Herod’s leaven,” but when it comes to specifics, he has always focused on the Pharisees’ problems.

Buy your Saint James the Greater statue at Holyart

This was during the Unleavened Bread period.” As a result, the Apostle James was the first to die as a martyr. Only one apostle, ironically, escaped death for his faith, and that was his brother, the Apostle John.

The Death of James

Martyrs and confessors are the two types of saints. A Christian martyr is someone who is executed for his or her Christian beliefs. Confessors are people who died as a result of natural causes.

In 44 AD, King Herod Agrippa I captured and beheaded James for heresy after he made the perilous journey back to Jerusalem to pay his respects. Even though James died in Jerusalem, his ashes were returned to his beloved Galicia, and a church was built over them. This was the beginning of Santiago de Compostela’s cathedral, and the body of St. James is said to be buried there to this day.

Because he was one of the most outspoken apostles, and given that King Herod killed James, it could have been James’ proclivity to speak boldly for Christ and speak against the evil that Herod was well known for. In any case, the Apostle James was completely transformed by the power of the Holy Spirit.

He was impulsive, outspoken, easily provoked to anger, and highly impulsive, and had a so-called “hair trigger” at one time, but like John, who became known as “the apostle whom Jesus loved” (John 13:23), he became a new creation in Christ (2 Corinthians 5:17) and was forever changed, and today is one of the 12 apostles who will rule or judge the 12 tribes of Israel in God’s coming kingdom (Matthew 19:28). That was the Apostle, James.

James was one of the first twelve disciples. When Jesus summoned the brothers, James and John were fishermen on the Sea of Galilee with their father Zebedee. They left their father and their business right away to follow the young rabbi. Because James is always mentioned first, he was most likely the older of the two brothers.

But James wasn’t above making blunders. When a Samaritan village rejected Jesus, he and John wished to summon fire from heaven. As a result, they were dubbed “Boanerges,” or “son of thunder.” The mother of James and John went too far when she asked Jesus to give her sons special positions in his kingdom.

Because of his devotion to Jesus, James was the first of the twelve apostles to be martyred. On the order of King Herod Agrippa I of Judea, he was killed with the sword around 44 A.D., as part of the general persecution of the early church.

In the New Testament, there are two other men named James: James, the son of Alphaeus, another of Christ’s chosen apostles, and James, the brother of the Lord, a leader in the Jerusalem church and author of the book of James.

#1. What did the blessed mary ask James the Greater to build?

#2. Where was Saint James the Greater Born?

#3. Who authenticated the relics of St James the Greater?

#4. James the Greater was thought to be the cousin of who?

#5. Whose agony did James the Greater witness in Gethsemane?

#6. Who ordered saint James the greater to build a Sanctuary?

#7. What was James the greater the first to do?

#8. What are the common symbols of James the Greater?

#9. What name did Jesus call James the Greater?

#10. What name does the Spanish refer to James too?

Who is James in the Bible?

James the Greater is one of the twelve apostles of Jesus Christ in the New Testament of the Bible. He is also known as James son of Zebedee or James the son of Alphaeus. According to the Bible, James was a fisherman before becoming one of Jesus’ disciples. He is considered one of the leaders of the early Christian church in Jerusalem. In the Bible, he is often mentioned alongside his brother John, who was also an apostle. Tradition holds that James the Greater was martyred for his faith.

What miracles did Saint James the Greater perform?

According to the Book of Acts, Saint James the Greater performed a number of miracles, including:
-Healing the sick
-Raising the dead
-Casting out demons
He was also responsible for bringing one of the first Gentile converts to Christianity, which was converted following a vision of Jesus. James the Greater played a significant role in the early Christian church in Jerusalem and was known for his leadership and faith.


Why is the scallop shell the symbol of St James?

Where is the tomb of St James?

What is Saint James the Greater known for?

Saint James the Greater, also known as James son of Zebedee, was one of the twelve apostles of Jesus Christ, a leader of the early Christian church in Jerusalem, performed miracles, and was known for his association with the Camino de Santiago pilgrimage and his remains are believed to be buried in the Cathedral of Santiago de Compostela in Spain. He is considered a Saint by the Catholic, Orthodox, and Anglican churches.

What is St James the Greater symbol?

The scallop shell is the symbol of Saint James the Greater, it is associated with him because of its association with the Camino de Santiago pilgrimage route and it is collected by the pilgrims as a sign of completion.