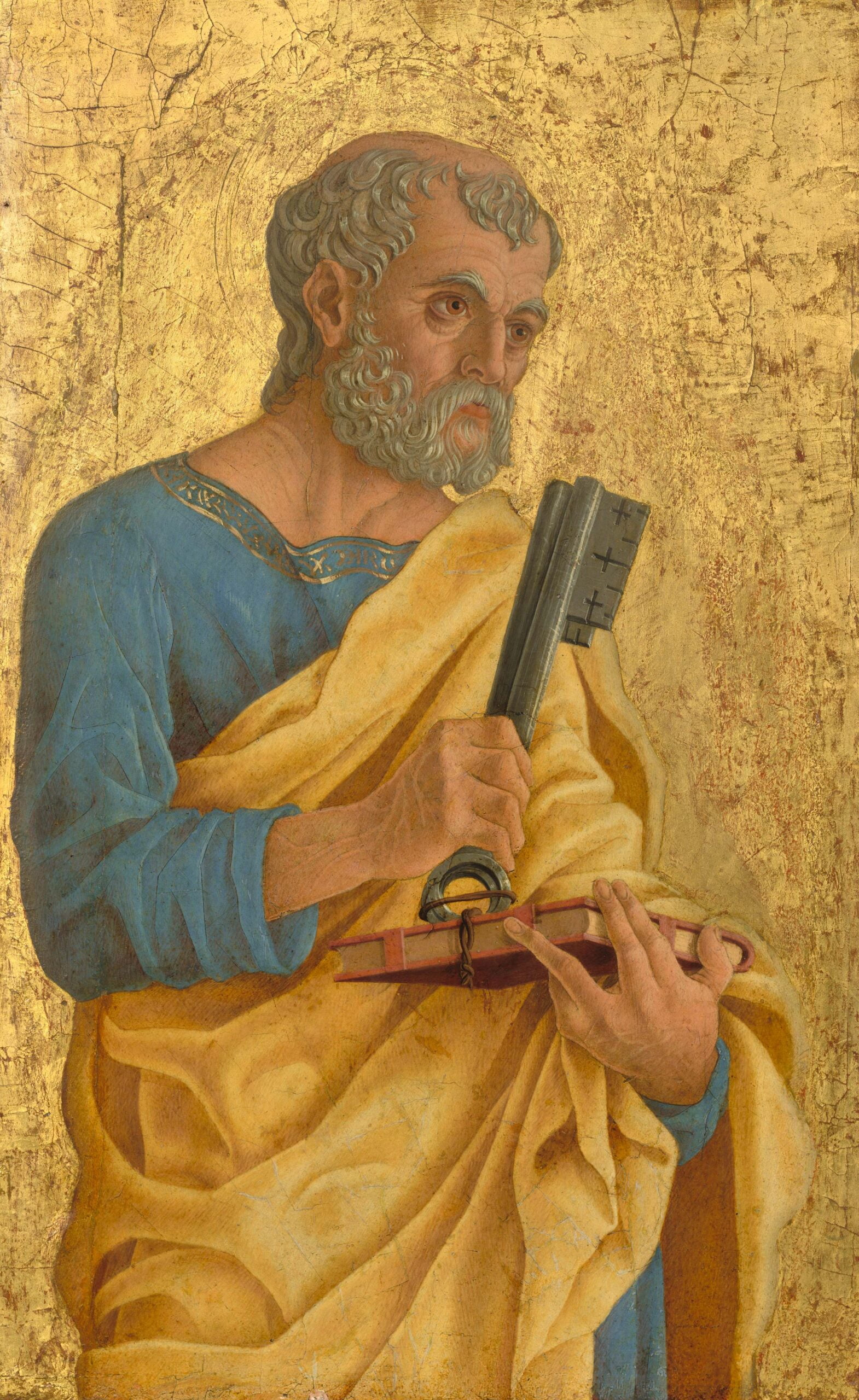 St Peter Facts show that Peter was a gregarious, natural leader, and an obvious spokesperson for the twelve.

Peter’s name is mentioned far more in the New Testament than any other of the disciples.

He was the older of the two brothers and the only married disciple. (Luke 4:38) His wife was known to travel with him when he was on a mission. (1 Corinthians 9:5)

His assignment was to bring the Gospel to the circumcised. (Galatians 2:7)

Peter is well known for denying Christ three times after Christ was arrested.

After his arrest, many years later he requested to be crucified with his head down.

He didn’t believe he was worthy to be crucified in the same manner as his Lord.

Saint Peter died a martyr’s death in Rome during the reign of Nero. Some speculate around the same time as Paul was being beheaded.

One of the St Peter Facts is that the Apostle Peter’s symbol is comprised of two keys that are crossed over each other. The keys point us to the Gospel of Matthew.

In chapter 16, Jesus asks the disciples,

“Who do people say that the Son of Man is?”

They respond with several answers. Jesus finally asks the disciples,

“You are the Christ, the Son of the living God.”

Jesus praises Peter for his confession of faith, and then he says, “And I tell you, you are Peter, and on this rock, I will build my church, and the gates of hell shall not prevail against it.

Peter is often portrayed as the closest disciple to Jesus and the leader of the Apostles. According to Matthew Jesus appeared first to Peter after the Resurrection. Among the Apostles, he is often described as the first among equals.

The upside-down cross reminds us how Peter was martyred. Tradition has it that the apostle said that he wasn’t worthy to be crucified like Jesus, so they crucified him upside down instead.

An appearance to Simon is also reported in Luke 24:34. In the final chapter of the Gospel of John, Peter three times affirms his love for Jesus, apparently restoring his threefold denial, and Jesus reconfirms Peter’s position (John 21:15; John 21:16; John 21:17), instructing him to “feed my sheep.”

According to Acts of the Apostles, Peter was a prolific performer of miracles. His first miracle cure was performed in the name of Jesus, at the temple, where the faithful saw the healed beggar praising God, and was the opportunity for some outstanding proselytizing.

In an even more difficult challenge, Peter resurrected Tabitha, a good woman and a disciple, who was certainly dead and her body had already been washed; a miracle that became known throughout Joppa and, as a result, many were converted. Peter was also capable of malevolent miracles if it suited his purposes.

A certain man named Ananias sold a possession and gave only some of the proceeds to Peter, who believed that the church was entitled to all the money. Peter realized the deceit immediately and Ananias fell dead, then Peter told Ananias’ wife she would also die because she repeated the deceit.

Those accounts would be conclusive evidence that Peter ranked alongside Jesus as a miracle worker.

Peter’s Position Among the Apostles

It is Peter who first declares Jesus the Messiah in the synoptic gospels, saying

Jesus praises Peter for this confession and declares, punning on Peter’s nickname:

“I tell you that you are Peter, and on this rock, I will build my church, and the gates of Hades will not overcome it.” (Matthew 16:18)

Peter is frequently mentioned in the Gospels as forming, together with James the Elder and John, a special group, or trinity of disciples, within the Twelve Apostles.

This core group of three was present at special incidents, such as the transfiguration and Jesus’ prayer in Gethsemane, in which the others did not participate.

Mark 5 reports that Peter alone was allowed to follow Jesus into the house of the synagogue leader Jairus where Jesus brought Jairus’ daughter back from the dead. Several times, Jesus takes Peter, John, and James aside and reveals things to them that the other disciples do not hear.

Peter in the Early Church

The author of the Acts of the Apostles portrays Peter as an extremely important figure within the early Christian community, although it is not clear whether Peter or James, “the Lord’s brother,” is the leading figure in the Jerusalem church.

Researching the St Peter Facts it is clear that Peter did play a key role early on. He took the lead in selecting a replacement for Judas Iscariot (Acts 1:15) and delivered a significant speech during Pentecost at which 3,000 Jews reportedly accepted his message and were baptized (Acts 2:38; Acts 2:39; Acts 2:40; Acts 2:41).

He became famous in Jerusalem for healing a crippled beggar. He was twice arraigned before the Sanhedrin for preaching the gospel.

In the Roman Catholic Church, Peter’s leadership role among the apostles lies at the root of the leadership role of the pope among the bishops of the Church as the body of Christ. Popes wear the Fisherman’s Ring, which bears an image of the saint casting his nets from a fishing boat.

The keys used as a symbol of the pope’s authority refer to the “keys of the kingdom of Heaven” promised to Peter (Matthew 16:18; Matthew 16:19). Peter is therefore often depicted in both Western and Eastern Christian art holding a key or a set of keys hence we have added this to this article.

The Roman patriarch, though not the only “pope” of the time, was recognized as the successor of Peter as bishop of Rome by all the ancient Christian churches, except those deemed to be heretical.

However, many Protestants the idea of Peter’s primacy on the grounds of lack of contemporary evidence, as the tradition that Peter went to Rome and was martyred there was not well established until the second century.

Moreover, even if the tradition is true, this does not necessarily establish Rome’s authority over other churches. In the Orthodox tradition, the Peter position is seen as primus inter pares—the first among equals, together with the other metropolitan patriarchates.

Recent studies of apocryphal literature, especially of the gnostic variety, indicate that Peter’s position was emphasized by the “orthodox” churches as a rallying point to strengthen the authority of the orthodox bishops against supposedly false teachings.

Thus, some of the gnostic gospels and other apocryphal literature portray Peter in a more negative light than the canonical gospels and surviving church tradition.

Prayer to Saint Peter The Apostle

In summary, the St Peter Facts tell us that Peter is the most well-known Apostle. Described by Jesus as “a fisher of men, “he was a fisherman by trade and was with Jesus from the beginning of his teachings.

According to Matthew, Peter was the first to believe in the divinity of Jesus. He said:

“Thou art the Christ, the Son of the living God.”

Peter was present at most of the important events described in the Gospels.

After Jesus was arrested by Roman police after the Last Supper a violent struggle ensued in which Peter drew his sword and sliced off the ear of one policeman. When Jesus was grabbed, the fighting stopped and the disciples ran away.

When the Romans asked Peter if he knew Jesus, Peter denied he did (three times) just as Jesus predicted. Peter “went outside and wept bitterly.” He later repented his denial.

#1. What was Peter's original name?

#2. Peter condemned Ananias and which woman for withholding money from the early church.

#3. With what does Peter say Christians were randomized with?

#4. Which disciple outran Peter to the tomb of Jesus

#5. In what city did Peter raise Tabitha (Dorcas) from the dead?

#6. How did the Apostle Peter die?

#7. When is the feast day of Apostle Peter?

#8. What kind of spirit does Peter teach that wives should have in 1 Peter 3, which is what displays the "unfading beauty" of their "inner self"?

#9. After Peter's stirring speech at Pentecost, about how many persons were immediately baptized?

What was Peter’s original name?

Saint Peter was originally named Simon. He was given the name Peter, which is Latin for “rock” after Jesus renamed him.

How was Peter crucified?

There is no definitive answer to this question, as there is no reliable evidence about how exactly Saint Peter was crucified. However, the traditional belief is that he was crucified upside down since he felt unworthy to be put to death in the same manner as Jesus Christ. This story first appears in the apocryphal Acts of Peter, which was written sometime in the 2nd or 3rd century AD. While this account cannot be verified, it does provide an interesting piece of early Christian tradition.

When is Saint Peter’s Feast day?