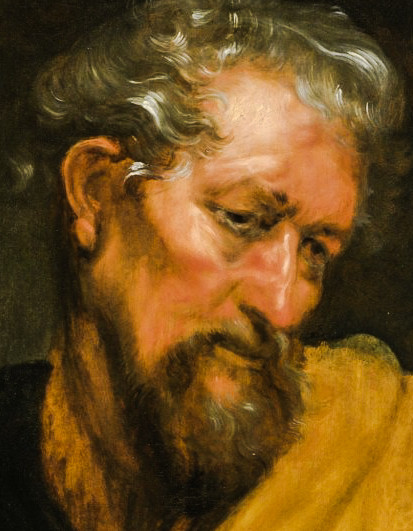 Three parallel knives are his apostolic symbol. According to legend, he was a missionary in Armenia and to some scholars, he was the only one of the 12 disciples to have royal blood or noble birth.

Saint Batholomew given name translates as “Son of Tolmai or Talmai” (2 Samuel 3:3). Talmai was the king of Geshur, and his daughter, Maacah, was David’s wife and the mother of Absolom.

This, however, was not his first name; it was his middle name. His given name was most likely Nathanael, and Jesus referred to him as “an Israelite indeed, without guile” (John 1:47).

The New Testament tells us very little about him. According to tradition, he was a great scholar of the law and the prophets, as well as a great searcher of the Scriptures.

He grew into a man completely devoted to the Carpenter of Nazareth and one of the Church’s most daring missionaries. He is said to have preached alongside Philip in Phrygia, Hierapolis, and Armenia.

He is regarded as the founder and martyr of the Armenian Church. However, tradition says that he preached in India, and his death seems to have taken place there. He died as a martyr for his Lord. He was flayed alive with knives.

When Philip brought Nathanael to Jesus, the first words he said to him were,

“Behold an Israelite indeed, without guile!”

Nathanael was perplexed, wondering how Jesus could recognize him.

Jesus told Nathanael that He had known him all along and that he would see much greater things than he had seen up to that point. Nathanael’s declaration that Jesus is the Son of God is the first recorded instance of someone accepting Jesus as the Son of God.

“Before Philip called you when you were under the fig tree, I saw you,” Jesus replied. St. Bartholomew interpreted Jesus’ revelation as a summons to follow Him.

Except for those who were present, no one would have known St. Bartholomew was near this fig tree at this point. Nonetheless, Jesus was aware of this, and, significantly, Jesus stated, “Before Philip called you.” At the very least, St. Bartholomew’s reaction suggests this “Rabbi, you are God’s Son! You are Israel’s King!” (Matthew 1:47; Matthew 1:49)

Bartholomew in the Bible

Bartholomew is listed among the Twelve Apostles of Jesus in the three synoptic gospels: Matthew, Mark, and Luke, and also appear as one of the witnesses of the Ascension; on each occasion, however, he is named in the company of Philip.

According to legend, after Christ’s death, resurrection, and ascension, Bartholomew evangelized in the East, including Mesopotamia, Persia, the Black Sea region, and possibly India. He died as a martyr.

According to legend, Bartholomew converted Armenia’s king by casting out a demon from the temple’s main idol and then destroying all of the idols. In a fit of rage, the king’s older brother had Bartholomew arrested, beaten, and executed.

If this identification is correct, then it was Bartholomew who said about Christ,

That remark elicited Christ’s response when he first met Bartholomew:

Bartholomew became a follower of Jesus after Christ revealed to him the circumstances surrounding Philip’s call (“under the fig tree,” John 1:48).

“Amen, amen, I say to you, you shall see the heavens opened, and the angels of God ascending and descending upon the Son of man,”

Bartholomew or Nathanael? We are once again confronted with the St Batholomew fact that we know very little about the majority of the apostles.

The unknown ones, on the other hand, were foundation stones, the 12 pillars of the new Israel, whose 12 tribes now encompass the entire earth.

Their personalities were secondary without diminishing their great office of carrying tradition from first-hand experience, speaking in the name of Jesus, and putting the Word Made Flesh into human words for the world’s enlightenment.

Their holiness was not an inward reflection of their position before God. It was a gift that they felt compelled to share with others.

The Good News was that all are called to the holiness of being Christ’s members, by the gracious gift of God. The simple fact is that humanity is meaningless unless God is its total concern. Then humanity, made holy with God’s holiness, becomes the most precious creation of God.

Eastern Christianity commemorates him on June 11, while the Catholic Church commemorates Bartholomew on August 24.

The Death of Saint Bartholomew

Various traditions describe various methods of Bartholomew’s execution. He is said to have been beheaded or to have had his skin removed and crucified upside down, similar to Saint Peter.

In Christian iconography, he is shown holding a tanner’s knife, which is used to separate an animal’s hide from its carcass. Some depictions have across in the background, while others (notably Michelangelo’s Last Judgment) show Bartholomew with his skin draped over his arm.

Saint Joseph saw him at the altar on the Feast of the Apostle Bartholomew. He motioned to Joseph and took the holy Gospel from the altar table, pressing it to his breast with the words, May the Lord bless you, and may your song delight the entire world.

Saint Joseph then began to compose hymns and canons to adorn the Feast Day of the Apostle Saint Bartholomew and the Feast Days of many other saints, composing approximately 300 canons in total.

There isn’t a lot of information available about Bartholomew. He was one of Jesus’ inner circle of disciples, one of the twelve, and a devout follower of Christ. The Catholic Church represents him with three parallel knives because of his belief method of death as a martyr flayed alive.

The name Bartholomew means “son of Talmai” (this is sometimes spelled, Tolman). His father was the King of Geshur, making Bartholomew a member of the royal family. He was regarded as a scholar who specialized in the law and the prophets. He was born in Cana of Galilee, the site of Jesus’ first recorded miracle, which launched His earthly ministry.

Bartholomew and the other disciples, known as the apostles or those who were sent, witnessed Jesus’ ministry for about three years. Following Jesus’ death, they launched the movement that became known as Christianity.

This makes Bartholomew one of the most important and authoritative leaders of the early church, and he most likely contributed to the spread of the gospel to specific regions during the first century, but he is never explicitly mentioned or singled out in any of the epistles.

Saint Bartholomew was chosen as one of the twelve apostles by our blessed Lord Himself.

Several learned interpreters of Holy Scripture believe that this apostle was the same as Nathaniel, a native of Cana in Galilee, a doctor of Jewish law, and one of Christ’s seventy-two disciples, to whom he was led by St. Philip, and whose innocence and simplicity of heart deserved the highest eulogy from Our Redeemer’s divine mouth.

He is mentioned among the disciples who gathered in prayer after Christ’s ascension, and he, like the others, received the Holy Spirit. Being eminently qualified by the divine grace to discharge the functions of an apostle, he carried the Gospel through the most barbarous countries of the East, penetrating the remoter Indies.

He then returned to the northwest part of Asia, where he met St. Philip in Hierapolis, Phrygia.

As a result, he traveled to Lycaonia, where he instructed the people in the Christian faith; however, we don’t even know the names of many of the countries where he preached.

However, the name Bartholomew is a family name that means “Son of Tholmai” (Bar-Thomas, or Bartholomaios in Greek). As a result, Bartholomew is commonly identified with Nathaniel, who is mentioned in Saint John’s gospel but not in the synoptic gospels.

#1. In what century did Bartholomew bring Christianity to Armenia?

#2. What is Bartholomew fathers name?

#3. What is another name for Bartholomew?

#4. Which Gospel did Bartholomew bring to India?

#5. What origin is the name Bartholomew?

#6. How many children did Bartholomew have?

#7. Why does Bartholomew hold skin?

#8. What century was Bartholomew born?

#9. What does the name Bartholomew mean?

#10. In what area of India did Bartholomew preach?

Why was Saint Bartholomew skinned?

Saint Bartholomew, also known as Nathanael, is believed by some Christian traditions to have been martyred by being flayed alive, which means that his skin was removed from his body. The exact details of his death and its reasons are not well-documented, and different traditions offer different accounts. Some Christian texts describe Bartholomew as having been martyred in India or Armenia, while others place his death in Persia or Jerusalem. The act of flaying someone alive was a severe form of punishment and torture in ancient times and was typically reserved for particularly heinous crimes.

What does the name Bartholomew mean?

Are Nathanael and Bartholomew the same person?

What is Saint Bartholomew famous for?

Saint Bartholomew, also known as Nathanael, is best known as one of the twelve apostles of Jesus Christ in the Christian tradition. He is known for his role as an apostle in the New Testament and being a martyr, as according to some Christian traditions, he was martyred by being flayed alive. He is also venerated as the patron saint of tanners, leather workers, and bookbinders, and his feast day is celebrated on August 24th. He is commonly depicted in art holding a knife and a book or holding his own skin.