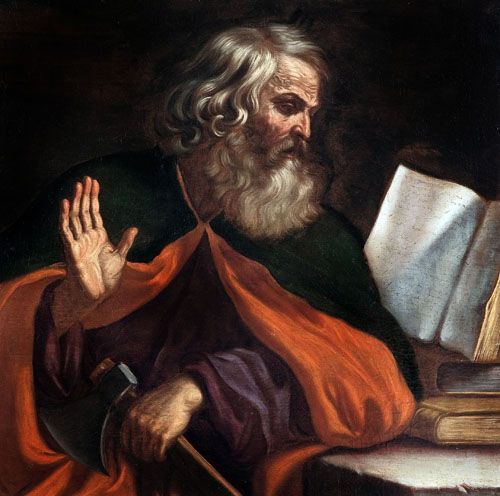 Matthias (also known as Saint Matthias in the Catholic church) was chosen by the remaining eleven disciples to replace the betrayer, Judas Iscariot before Jesus’ resurrection.

The scriptural recommendation was for twelve disciples and so the Apostle Peter declared that they must choose another to take the place of Judas Iscariot.

Matthias was chosen as the twelfth Apostle since he was present with Jesus Christ during his time on Earth as well as through his crucifixion.

While two men were chosen to take the twelfth place in the Apostles lots were drawn and Matthias was selected as the twelfth and final apostle.

Who was Saint Matthias?

Jesus himself chose the original 12 apostles, and the rest of the apostles chose Saint Matthias after the Ascension. They cast their votes through lots and selected Matthias.

There is no further information about him in the New Testament. It is believed that Matthias placed his faith in Jesus Christ above everything else and was present with the other apostles at Pentecost. He embraced all the teachings of Jesus and sacrificed his life for the service of the Lord, even after being persecuted by many.

He also worked many miracles in the name of the Lord Jesus, which converted many to the Christian faith. He is a patron of carpenters, tailors, and those who are affected by smallpox.

Saint Matthias was born in the 1st century AD, at Judaea. In his early youth, he studied the Law of God under Saint Simeon. According to the acts, it is said that Matthias had accompanied the Lord from the time of his baptism and was among the 72 disciples paired off and dispatched by Jesus.

The Gospel of Matthias

The Gospel of Matthias is a lost text which claims to be written by Matthias. The early church had mixed opinions on its authenticity, and we only know about it from the writings of others.

Clement of Alexandria quotes it while describing a heretical sect of Christianity known as the Nicolaitanes—whose teachings John the Revelator claims Jesus hated (Revelation 2:6)—telling us it says,

“We must combat our flesh, set no value upon it, and concede to it nothing that can flatter it, but rather increase the growth of our soul by faith and knowledge”.

Eusebius claimed it was written by heretics as well. But without the text itself, it’s impossible to say what value it may have had.

As one of the Twelve, Matthias was an apostle, which meant he was charged with preaching the gospel and helping it spread throughout the known world. The word we translate as an apostle (Apostolos) literally means “one who is sent,” and all of the apostles were sent somewhere. But where exactly Matthias went depends on which tradition you follow.

According to tradition, it is believed that, after the Descent of the Holy Spirit, Matthias ministered and preached the Gospel at Jerusalem and in Judaea with the other apostles.

From Jerusalem, he went to the Syrian Antioch and was present in the city of Titanium and Sinope. During his time here, Saint Matthias was imprisoned but was freed miraculously by Saint Andrew the First-Called. After this, he traveled to the city of Amasea, which was on the shore of the Caspian Sea.

He accompanied Apostle Andrew during a three-year journey and was with him at Edessa and Sebaste. According to tradition, he preached at Pontine Ethiopia (presently known as Western Georgia) and Macedonia. He was constantly persecuted by the people there but kept preaching the Gospel to them.

In one version of the story, the Pontine Ethiopians were considered to be pagans and barbarians, and they forced the saint to drink poison. But he remained unharmed because he had the Lord’s protection, and he even healed other prisoners who were blinded by the poison.

Saint Matthias left the prison, and this enraged the pagans who kept searching for him in vain. They intended to kill the saint, and according to the story, the earth opened up and engulfed them.

After this, he returned to Judaea and continued enlightening his countrymen about Christ’s teachings. He also told them how he was able to perform miracles in the name of the Lord Jesus and motivated many to have faith in Christ.

This enraged the Jewish High Priest Ananias, who hated Christ. He had already ordered the execution of Apostle James in the past and decided to arrest Matthias. The saint was brought for judgment before the Sanhedrin at Jerusalem.

During the hearing, High Priest Ananias slandered the Lord with a blasphemous speech. But Matthias, using the prophecies of the Old Testament, explained that Jesus Christ is “the True God, the promised Messiah, the Son of God, Consubstantial and Coeternal with God the Father.”

What was the holiness of Matthias? Obviously, he was suited for apostleship by the experience of being with Jesus from his baptism to his ascension. He must also have been suited personally, or he would not have been nominated for so great a responsibility.

Must we not remind ourselves that the fundamental holiness of Matthias was his receiving gladly the relationship with the Father offered him by Jesus and completed by the Holy Spirit?

If the apostles are the foundations of our faith by their witness, they must also be reminders, if only implicitly, that holiness is entirely a matter of God’s giving, and it is offered to all, in the everyday circumstances of life. We receive, and even for this God supplies the power of freedom.

According to Nicephorus, Saint Matthias was stoned to death in Ethiopia (modern-day Georgia). An extant Coptic “Acts of Andrew and Matthias,” validates this story. A marker that is placed on the ruins of the Roman fortress at Gonia claims that the saint is buried at that site.

The Synopsis of Dorotheus also talks about a similar story. It claims that Matthias was preaching the Gospel in the sea harbor of Hyssus and at the mouth of the river Phasis. He died at Sebastopolis and was buried near the Temple of the Sun.

In another tradition, Saint Matthias was stoned by the people of Jerusalem after he enraged Ananias. After his death, he was beheaded by the Jews to conceal their crime. His killers then branded him as an enemy of Caesar. According to Hippolytus of Rome, the saint died of old age in Jerusalem.

It is said that Empress Helena, the mother of Emperor Constantine I, brought the saint’s remains to Italy. A part of these relics was placed in the Abbey of Santa Giustina and the remaining in the Abbey of St. Matthias.

Matthias, whose name means “gift of God”, was the disciple chosen to replace Judas as one of the twelve Apostles. The Acts of the Apostles state that he was also one of the 72 disciples that the Lord Jesus sent out to preach the good news. Matthias was with the Lord since His Baptism, and was “a witness to Christ’s Resurrection,” according to St. Peter in Acts. He remained with Jesus until His Ascension.

According to various traditions, Matthias preached in Cappadocia, Jerusalem, the shores of the Caspian Sea (in modern-day Turkey), and Ethiopia. He is said to have met his death by crucifixion in Colchis or by stoning in Jerusalem.

There is evidence cited in some of the early Church fathers that there was a Gospel according to Matthias in circulation, but it has since been lost and was declared apocryphal by Pope Gelasius.

He is invoked for assistance against alcoholism, and for support from recovered alcoholics.

The Bible tells us almost nothing about Matthias. But what we do know is that he’d been following Jesus from the beginning despite not receiving a personal invitation, like the original members of the Twelve. And whether Matthias being an apostle was God’s design or Peter’s, he became an integral leader in the first-century church and played an important role in spreading the gospel throughout the world.

#1. Which of the disciple freed Apostle Matthias when he was locked in prison?

#2. In which mount was apostle Matthias selected as an apostle?

#3. How many apostles of Jesus were present when the lot was cast to replace judas with Matthias?

#4. What town was Apostle Matthias given Birth to?

#5. Which other disciple was the lot cast with Matthias?

#6. Matthias preached in these cities except for?

#7. Saint Matthias Relics was transported from Jerusalem to what city?

#8. What chapter of Act was Apostle Matthias mentioned?

#9. What book of the new testament was Matthias mentioned?

How did Saint Matthias become an Apostle?

According to the Bible, Saint Matthias was chosen by the remaining 11 apostles to replace Judas Iscariot as the twelfth apostle. They did this by casting lots, as directed by Peter in the book of Acts.

What specific teachings or writings did Saint Matthias contribute to the early Christian Church?

Saint Matthias is not known to have made any specific contributions to the early Christian Church in terms of teachings or writings. He is mainly remembered for being one of the 12 apostles chosen by Jesus to be his closest followers.

What is the significance of Saint Matthias in the Eastern Orthodox Church?

Saint Matthias is honored as one of the twelve apostles in the Eastern Orthodox Church, and his feast day is celebrated on February 24th.

What is the traditional symbol or icon associated with Saint Matthias?

Saint Matthias is often depicted in Christian art holding an axe or a spear, which are symbols of his martyrdom.

Are there any notable historical or religious sites associated with Saint Matthias?

Saint Matthias is often depicted in Christian art holding an axe or a spear, which are symbols of his martyrdom.

What is the feast day of Saint Matthias and how is it celebrated?

Is there any other notable information about Saint Matthias that is not widely known?

Saint Matthias is said to have preached in Judaea, Ethiopia, and other countries, and was martyred in Jerusalem, but there is little historical evidence to support these claims. According to tradition, Saint Matthias was martyred by being stoned and then beheaded.