The Apostle Saint James the Less 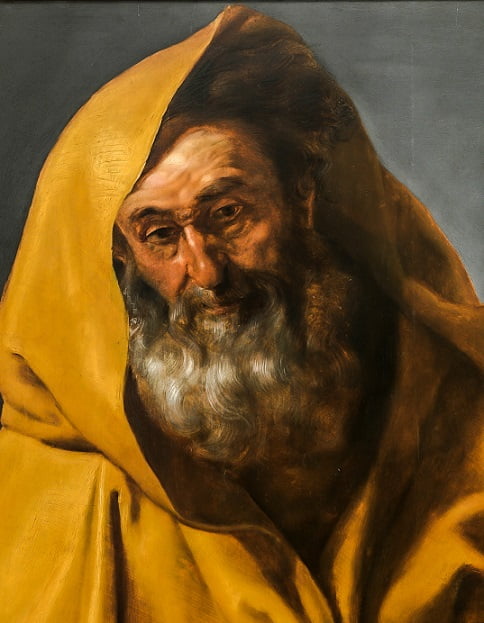 James, the Lesser or Younger, son of Alpheus, or Cleophas and Mary, lived in Galilee. He was the brother of the Apostle Jude.

He is also called “the Minor”, “the Little”, “the Lesser”, or “the Younger”, according to translation. He is not to be confused with James, son of Zebedee (“James the Great or Elder”).

He is identified by some as James, the Lord’s brother, thought of by St. Jerome and those who followed him as really the cousin of Jesus.

James the Less was traditionally commemorated with St. Philip either on May 1 or May 3 in the Western Christian calendars.

He wrote the Epistle of James, preached in Palestine and Egypt, and was crucified in Egypt, according to legend.

One of the lesser-known disciples was James. Some scholars believe he was Matthew, the tax collector’s brother. James was a man with a strong personality and one of the fieriest types. Another legend has it that he died as a martyr and his body was sawed into pieces. His apostolic symbol was a saw.

St. James the Less, also called James, son of Alphaeus, or James the Younger, (1st century BC Galilee, Judaea, Roman Empire), one of the Twelve Apostles of Jesus.

He, along with John and Peter, was regarded as early Church pillars, and St. Paul met with him to discuss how best to carry on the Church’s mission.

He was among the first to witness the risen Christ.

According to one legend, James declared after the Crucifixion that he would fast until Christ returned. The risen Jesus appeared to him and prepared a meal for him.

To avoid confusion with the other Apostle named James, whose feast we celebrate on July 25, James was given the nickname “the Less.”

We believe this means he was younger than the other St. James, known as “the Greater.” Alphaeus’ son was James the Less.

On the day Jesus was crucified, his mother stood alongside Mary at the Cross.

James the Less became an important part of the Church’s growth in Jerusalem after Jesus’ ascension.

According to tradition, he presided over an important meeting of the early Church, the Council of Jerusalem, in the year 50 AD.

St. Paul, St. Peter, and other Church leaders met at this time to discuss whether Gentiles or people who were not Jewish, could become followers of Jesus.

James carefully listened to the discussion and assisted the group in deciding that the Church was open to all and that all people could be saved by living as Jesus’ followers.

Accomplishments of Saint James the Lesser

Jesus Christ chose James to be a disciple by hand. He was present in Jerusalem’s upper room with the 11 disciples after Christ ascended to heaven. He could have been the first disciple to see the risen Christ.

Even though his achievements are unknown to us today, James may simply have been overshadowed by the more prominent disciples. Even so, being named one of the twelve was no small feat.

His most significant act was his intervention in the contentious relationship between Christians of Jewish origin and those of pagan origin.

In this regard, he worked with Peter to overcome, or rather integrate, the original Jewish dimension of Christianity with the need not to impose on converted pagans the obligation to submit to all the norms of the Law of Moses.

The Book of Acts has preserved for us the compromise solution proposed precisely by James and accepted by all the Apostles present, according to which pagans who believed in Jesus Christ were only to be asked to abstain from the idolatrous practice of eating the meat of animals sacrificed to the gods, as well as from “impropriety,” a term that probably alluded to irregular matrimonial unions, it was a question of adhering to only a few prohibitions of Mosaic Law held to be very important.

Saint James the Lesser in the Bible

James the Lesser was the son of Alphaeus, while James the Greater was the son of Zebedee (Matthew 10:3; Mark 3:8; Luke 6:15). According to 5th-century theologian Jerome and 1st-century bishop Papias of Hierapolis, his mother was Mary of Cleophas (sister of Jesus’ mother).

He was also identified as Jude Thaddeus’ brother and possibly one of Jesus’ brothers (according to Galatians 1:19 and again according to Jerome).

Only a few verses in the Bible mention James the Lesser and what he did for the early church. He was one of the disciples who witnessed Christ’s resurrection (1 Corinthians 15:7), a confidante of Peter when he was on the run from Herod Agrippa (Acts 12:17), and later rose to prominence in the church along with the other apostles. He was also credited as the writer of the Epistle of James.

The Weakness of Saint James the Less

Like the other disciples, James deserted the Lord during his trial and crucifixion.

While James the Lesser is one of the least known of the 12, we can’t overlook the fact that each of these men sacrificed everything to follow the Lord. In Luke 18:28, their spokesman Peter said, “We have left all we had to follow you!

The Death of Saint James the Less

If we connect James son of Alphaeus to James the Just (Jesus’ brother), we learn that he was pushed from the pinnacle of a temple where he was preaching, beaten with a fuller’s club, and stoned to death.

In art, James son of Alphaeus is commonly depicted with a fuller’s club, reflecting the church’s belief that he was the same person as James the Just.

However, according to the tradition that James son of Alphaeus preached in Egypt, he was crucified in the city of Ostrakine.

“On the Twelve Apostles of Christ”, Hippolytus, a theologian who lived in the second and third centuries, allegedly recorded James’ death:

“And James the son of Alphaeus, when preaching in Jerusalem, was stoned to death by the Jews, and was buried there beside the temple.”

This is the same death that tradition attributes to James, Jesus’ brother, but scholars have little reason to believe “On the Twelve Apostles of Christ”.

The text was discovered in the nineteenth century, and most scholars believe it is pseudepigrapha (writing that falsely claims to be written by someone).

As a result, the ambiguities and unknowns surrounding James son of Alphaeus prevent us from knowing how or where he died.

However, since the majority of the Twelve were martyred, it would be surprising if one of the lesser-known disciples, like John, died of old age.

They gave up family, friends, homes, jobs, and everything they knew to follow Christ’s call.

These ordinary men who did extraordinary things for God served as role models for us. They laid the groundwork for the Christian church, launching a movement that quickly spread across the globe. Today, we are a part of that movement.

In the New Testament, there is the third James. He was Jesus’ brother, a leader in the Jerusalem church, and the author of the book of James.

Every listing of the 12 disciples includes James of Alphaeus, who is always listed ninth in the order.

Although the Apostle Matthew (known as Levi, the tax collector before becoming a follower of Christ) is identified as the son of Alphaeus in Mark 2:14, scholars doubt he and James were brothers. The two disciples are never mentioned in the Gospels.

Saint James the Less, the author of the first Catholic Epistle, was the son of Alphaeus of Cleophas. His mother Mary was either a sister or a close relative of the Blessed Virgin, and for that reason, according to Jewish custom, he was sometimes called the brother of the Lord.

The Apostle held a distinguished position in the early Christian community of Jerusalem. St. Paul tells us he was a witness of the Resurrection of Christ; he is also a “pillar” of the Church, whom St. Paul consulted about the Gospel.

According to legend, he was the first Bishop of Jerusalem and attended the Jerusalem Council around the year 50. The historians Eusebius and Hegesippus wrote, St. James, was martyred for the Faith by the Jews in the Spring of the year 62, although they greatly admired his person and had given him the surname “James the Just.”

He has always been regarded as the author of the Epistle that bears his name.

Internal evidence based on the Epistle’s language, style, and teaching reveals its author as a Jew familiar with the Old Testament and a Christian thoroughly grounded in Gospel teachings. External evidence from the Church’s early Fathers and Councils confirmed its authenticity and canonicity.

#2. What is another name for James the less?

#3. When is James the less feast day according to the catholic calendar?

#4. St James the less was the first bishop of where?

#5. How is James the less called in Eastern Christianity?

#6. What is the meaning of James the less name?

#7. James the less was an author of which Epistle ?

#8. What epistle is attributed to James the less?

#9. Saint James the Lesser is the patron saint of

#10. What was the reason for James death?

What did James the Just believe?

Why is St James called the lesser?

What is James the Less the patron saint of?

Saint James the Lesser, also known as James the Just, is considered the patron saint of pharmacists. He is associated with them because of the way he was martyred, which is by being beaten to death by a club. This is why he is depicted in art with a club or saw and is associated with pharmacists, who use a pestle, which resembles a club, in their work.

How did St. James the Less die?

Saint James the Lesser, also known as James the Just, was martyred by being beaten to death by a club. This is the traditional account of his death, but there is no historical evidence to confirm it. It is said that he was the first bishop of Jerusalem and that he was stoned and then clubbed to death around AD 62. He is venerated as a martyr by the Catholic, Orthodox, and Anglican Church. However, it is important to note that there is no historical evidence to confirm this account and it is based on tradition.