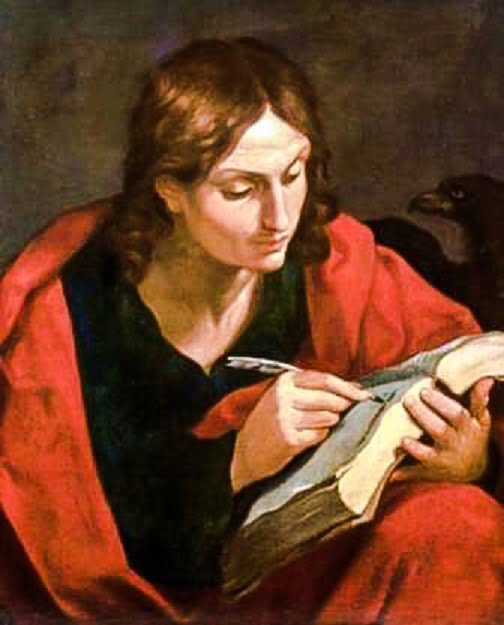 According to the New Testament, Saint John the Apostle was one of Jesus’ Twelve Apostles.

He was the son of Zebedee and Salome and was generally regarded as the youngest apostle. James, another of the Twelve Apostles, was his brother.

The Apostle Saint John (active 1st century A.D.), one of Jesus’ 12 Apostles, is traditionally regarded as the author of the Fourth Gospel, the Book of Revelation, and three Letters, or Epistles, that bears his name.

Throughout the Gospels, John and James, along with Peter, are portrayed as the most closely associated with Jesus of all his disciples. John, along with Peter and James, witnesses Jesus’ supernatural communication with Moses and Elijah on Mt. Tabor; the night before Jesus’ death, he is present in the Garden of Gethsemane.

When everyone else abandons the dying Jesus, only John remains, and Jesus entrusts his mother, Mary, to his care. Following Jesus’ death, John is presented as one of the leaders of the Jerusalemite disciples of Jesus.

John, the son of Zebedee and Salome, was born in Galilee, most likely between A.D. 10 and 15. His father was a fisherman, which is what John was doing when he met and followed Jesus (Mark 5:37).

James, his brother, also followed Jesus. Both brothers were nicknamed Boanerges by Jesus, which means “sons of thunder” in Aramaic (Mark 3:17), about their fiery demeanour toward Jesus.

John, one of the first twelve apostles called by Jesus and known as the “beloved disciple,” knew and loved Jesus well. He witnessed him teach and perform miracles. John had the honor of sitting next to Jesus and leaning against his breast at the Last Supper (John 13:23).

Through prayerful reflection on Jesus’ words and deeds, John realized that Jesus is the way to eternal life (John 14:6)–a life revealed to the disciples first, and then to all people: “What we have seen and heard we proclaim now to you, so that you too may have fellowship with us; for our fellowship is with the Father and with his Son, Jesus Christ” (1 John 1:3).

During major events, Peter, James, and John travelled with and were close to Jesus. The three were with Jesus when he raised Jairus’ daughter from the dead, as well as during Jesus’ transfiguration when he became robed in light and Moses and Elijah appeared.

These three were also present when Jesus prayed in the Garden of Gethsemane, falling asleep several times the night before Jesus’ crucifixion, despite Jesus’ instructions to stay awake and pray.

Peter and John were even tasked with preparing the Last Supper for Jesus and his disciples, the momentous occasion when Jesus was betrayed and began the tradition that became known as the Eucharist, or what we now call communion.

James and John were zealous in their devotion to Jesus and his message, which often led to hasty actions. Because of this, Jesus referred to the brothers as “Boanerges” or “Sons of Thunder.”

They desired to call down the fires of heaven on a group of Samaritans who had rejected Jesus and his disciples, earning the brothers rebuke from Jesus. Because of their importance or closeness to Jesus, the two even asked if they could sit on thrones alongside him in his glory.

Saint John in the Scripture

John is best known as the author of the Gospel of John, as well as three other New Testament books, the Epistles of John and the Book of Revelation.

The authorship of the Gospel is attributed to the “disciple whom Jesus loved,” and John 21:24 claims the Gospel of John is based on the testimony of the “Beloved Disciple.”

However, true authorship has been disputed since the year 200. According to Eusebius’ Ecclesiastical History, the First Epistle of John and the Gospel of John are widely accepted as John’s. Eusebius continues with the second and third points.

St. John is the patron saint of authors, love, loyalty, and friendship. In art, he is frequently depicted with an eagle, symbolizing “the height he rose to in his gospel.” Other icons depict him looking up into heaven and dictating his Gospel to his disciple.

John held an authoritative position in the early church, as evidenced by his visit to Samaria with St. Peter to lay hands on new converts. He played an important role in St. Paul’s conversion. The evidence does not support John’s opposition to granting Gentiles membership in the church.

The only two apostles sent by Jesus to prepare for the final Passover meal, the Last Supper, were John and Peter. Rather than lying on the couches, St. John sat next to Jesus, leaning on him during the meal.

John was the only one of the Twelve Apostles who did not abandon the Savior during His crucifixion. When the Savior appointed him as the guardian of His Mother, he stood faithfully at the cross.

According to Church tradition, John went to Ephesus after Mary’s Assumption. Later, he was exiled by the Romans to the Greek island of Patmos, where he allegedly wrote the Book of Revelation.

#2. Saint John is the patron of what three virtues?

#3. Traditionally, who were John's parents?

#4. What did Apostle John witness at the garden of Gethsemane?

#5. Saint John the Apostle and his brother were called?

#6. Which of these epithets has *not* traditionally been used to refer to St. John?

#7. When was John the Apostle born?

#9. Where did Saint John the Apostle and his family live?

#10. St. John the Apostle founded churches in Asia Minor and became bishop of?

According to the most plausible theory of John’s death, he was arrested in Ephesus and faced martyrdom when his enemies threw him into a large basin of boiling oil. However, according to legend, John was miraculously saved from death. The authorities then sentenced John to slave labour in Patmos’ mines.

John had a vision of Jesus Christ and wrote the prophetic book of Revelation on this island in the southern Aegean Sea. Later, possibly due to old age, the apostle John was released and returned to what is now Turkey. He died peacefully as an old man sometime after AD 98, the only apostle to do so.

John had a vision of Jesus Christ and wrote the prophetic book of Revelation on this island in the southern Aegean Sea. Later, possibly due to old age, the apostle John was released and returned to what is now Turkey. He died peacefully as an old man sometime after AD 98, the only apostle to do so.

Another theory about John’s death is linked to the Papias of Hierapolis, a second-century bishop. According to one interpretation of Papias’ writings, John was murdered by a group of Jewish men. Many historians, however, believe Papias was misquoted or misread, casting doubt on the theory’s credibility.

There is also a legend that claims John did not die but instead ascended directly to heaven, like Enoch and Elijah. There is no biblical evidence to support this story.

God makes the call, and humans respond. The vocation of John and his brother James, as well as Peter and his brother Andrew, is stated very simply in the Gospels: Jesus called them; they followed. The account demonstrates the absoluteness of their response.

“They were in a boat, with their father Zebedee, mending their nets. He summoned them, and they immediately abandoned their boat and father to follow him” (Matthew 4:21; Matthew 4:22).

That faith was to be rewarded by a special friendship with Jesus for the three former fishermen—Peter, James, and John. They were the only ones who witnessed the Transfiguration, the raising of Jairus’ daughter, and the agony in Gethsemane. But John’s friendship was something special. Tradition ascribes to him the Fourth Gospel, but most modern Bible scholars believe that the apostle and the evangelist are not the same people.

St. John the Apostle, son of Zebedee and Salome, was one of Jesus’ Twelve Apostles. Our Lord appointed John as an Apostle during the first year of His public ministry. He is thought to be the same as John the Evangelist, John of Patmos, and the Beloved Disciple.

St. James the Great, another of Jesus’ Twelve Apostles, was John’s older brother. The brothers were referred to by Jesus as “Boanerges,” which means “sons of thunder.” John is thought to be the longest-living apostle and the only one who did not die as a martyr.

Who is Saint John or Apostle John in the Bible?

In the Bible, Saint John or Apostle John is one of the twelve apostles of Jesus Christ. He is also referred to as John the Apostle or John the Evangelist. He is believed to be the author of the Gospel of John, the letters of 1 John, 2 John, and 3 John, and the book of Revelation. He is considered one of the closest disciples of Jesus and is also known as “the beloved disciple” in the Bible.

What is the significance of Saint John in Christianity?

Saint John, also known as Apostle John or John the Evangelist, is one of the twelve apostles of Jesus Christ. He is considered an important figure in Christianity for his role as an apostle and his writings in the New Testament. He is the author of the Gospel of John, which emphasizes the divinity of Jesus, and the letters 1 John, 2 John, and 3 John. He is also the author of the book of Revelation, which is significant for the Christian tradition as it contains a vivid description of the end of the world, the second coming of Jesus, and the final judgment. Saint John is also revered for his devotion to Jesus and his steadfast faith in the face of persecution. He is often depicted in Christian art as an old man with an eagle, symbolizing spiritual insight and rapid flight to heaven.

Which books of the Bible are attributed to Saint John?

What is the symbol associated with Apostle John?

The symbol associated with Saint John is an eagle. This symbol dates back to Jerome’s Commentary on Matthew, which states that the eagle signifies “John the Evangelist who, having taken up eagle’s wings and hastening towards heaven, soars above all earthly things.” The eagle is a fitting symbol for John as it is a bird that flies higher than any other. This symbolism reflects John’s unwavering faith and his commitment to Christ.
Sources
https://en.wikipedia.org/wiki/Eagle_of_Saint_John
https://www.christianiconography.info/john.html
https://www.newadvent.org/cathen/08492a.htm