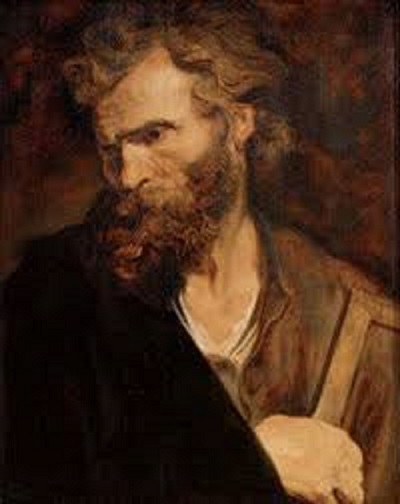 Jude was dubbed “Trinomious” by Jerome, which translates as “a man with three names”.

He was a ferocious and violent nationalist who aspired to world power and dominance for the Chosen People. According to the New Testament (John 14:22), at the Last Supper, he asked Jesus,

“But Lord, why do you intend to show yourself to us and not to the world?”

Judas Thaddeus was eager to make Christ known to the rest of the world. However, not as a suffering Saviour, but as a ruling King. The answer Jesus gave him clearly shows that the way of power can never be substituted for the way of love.

It is said that Jude went to Edessa, near the Euphrates River, to preach the gospel. He healed many people there, and many people believed in the name of the Master.

St. Jude was born into a Jewish family in Paneas, a Galilean town that was rebuilt by the Romans and renamed Caesarea Philippi. Like almost all of his contemporaries in that area, he was most likely a farmer who spoke both Greek and Aramaic.

St. Jude was the son of Clopas and Mary, the Virgin Mary’s cousin. According to legend, Jude’s father, Clopas, was assassinated for his forthright and outspoken devotion to the risen Christ.

He is sometimes depicted with a carpenter’s ruler or a scroll or book, possibly the Epistle of Jude. Biblical scholars agree that Jude was the son of Clopas, and his mother Mary was a cousin of the Virgin Mary.

According to ancient writers, Jude preached the Gospel in Judea, Samaria, Idumaea, Syria, Mesopotamia, and Lybia. He returned to Jerusalem in the year 62, according to Eusebius, and assisted in the election of his brother, St. Simeon, as Bishop of Jerusalem.

Jude is not the same as Judas Iscariot, who betrayed Our Lord and became despondent as a result of his great sin and lack of faith in God’s mercy.

Jude was the one who asked Jesus at the Last Supper why He would not appear to the entire world after His resurrection. Nothing else is known about his life.

St. Jude wrote a letter to newly converted Christians in the Eastern Church who were being persecuted in 60 A.D. In his letter, he warned them to be wary of modern-day false teachers who spread false teachings about Christianity. He encouraged them to persevere and to remain firm in their faith in the face of the harsh realities they were confronted with.

Many devotees still visit the site as a mark of respect and admiration. St. Jude Thaddeus is known as the patron saint of hopeless causes and desperate situations because of his unwavering faith.

He preached the Gospel with zeal, often in the most trying of circumstances. He made a significant difference in people’s lives by offering them the Word of God through the power of the Holy Spirit. According to the Gospel, St. Jude was a brother of St. James the Less, who was also an Apostle.

Though Saint Gregory the Illuminator is credited with being the “Apostle to the Armenians” when he baptized King Tiridates III of Armenia in 301 C.E., converting the Armenians, the Apostle Jude and Apostle Bartholomew are traditionally believed to have been the first to bring Christianity to Armenia and are thus venerated as the patron saints of the Armenian Apostolic Church. The Thaddeus Monastery is associated with this tradition.

Saint Jude, also known as Saint Jude Thaddeus, is revered as the Patron Saint of Hopeless Causes around the world. He was a cousin of Jesus Christ and one of the twelve Apostles. He preached the Gospel with courage, often in the most difficult of circumstances.

Saint Jude is frequently depicted carrying a representation of Jesus. According to tradition, this recalls a miracle in which a king afflicted with leprosy was cured after Saint Jude gave him a cloth that had been pressed against the face of Christ.

Many people in desperate need have prayed to Saint Jude throughout the ages. Saint Bridget of Sweden stated that she was directed in a vision to pray to Saint Jude with deep faith and confidence.

“By his surname, Thaddeus, the amiable or loving, Saint Jude will show himself most willing to help,”

she claimed Christ told her.

Today, Saint Jude remains one of the most popular and beloved Saints, a heavenly intercessor for all who seek God’s help during times of family crisis, sickness, and trouble, especially when all hope appears to be lost.

What is the significance of Saint Jude in the Eastern Orthodox Church?

In the Eastern Orthodox Church, Saint Jude is venerated as one of the twelve apostles, and his feast day is celebrated on June 19th.

How is Saint Jude depicted in art and iconography?

In art and iconography, Saint Jude is often depicted holding a book or scroll, as a reference to his epistle in the New Testament. He may also be shown holding an image of Jesus or staff and is sometimes depicted with a flame above his head, a symbol of the Holy Spirit.

Is there a Saint Jude relic?

Yes, there are several relics of Saint Jude that are venerated in different churches around the world. Some of these relics include a finger bone, a tooth, and a piece of cloth that is said to have been touched to his body.

#3. Who was Apostle Jude's Mother?

#4. What did Apostles Jude and Bartholomew bring to Armenia?

#5. What rite traces its origins to Saint Jude Thaddaeus?

#6. Where is Saint Jude buried?

#7. Saints Simon and Jude are venerated together in the Roman Catholic Church on which day?

#8. Saint Jude is the patron saint of which police department?

#9. Jude claims to be the servant of Jesus Christ, and also related to someone. To whom does he say he's related?

#10. In what situation do Roman Catholics invoke the intercession of Saint Jude?