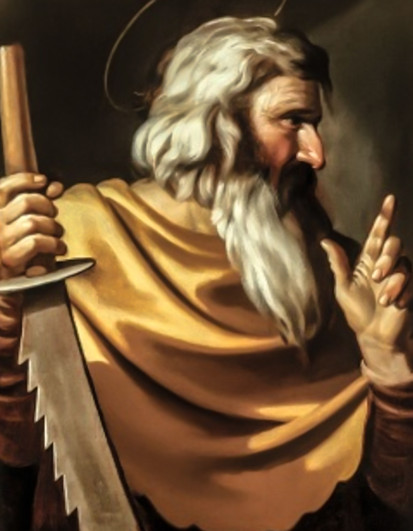 The interesting thing about researching the characteristics of Saint Simon is that he is never mentioned throughout The Bible, except to list his name as one of the twelve disciples.

The word Canaanite as used to describe Simon is actually a term that relates to his position as a member of the zealots, a political party.

Simon the Zealot, one of Jesus Christ’s 12 apostles, is a mystery character in the Bible. We have one tantalizing bit of information about him, which has led to an ongoing debate among Bible scholars.

In some versions of the Bible (such as the Amplified Bible), he is called Simon the Cananaean. Simon the Zealot was rebellious and fearless, but when h met Jesus, he became a lover of God and purpose.

Simon was a rabid revolutionist, a fearless firebrand of agitation.

He was twenty-eight years old when he became attached to the apostles. He was a fiery agitator and was also a man who spoke much without thinking. He had been a merchant in Capernaum before he turned his entire attention to the patriotic organization of the Zealots.

He was a rebel by nature and an iconoclast by training, but Jesus won him for the higher concepts of the kingdom of heaven. He had always identified himself with the party of protest, but he now joined the party of progress, unlimited and eternal progression of spirit and truth. Simon was a man of intense loyalties and warm personal devotions, and he did profoundly love Jesus.

The Zealot party had a long history in Israel, formed by men who were passionate about obeying the commandments in the Torah, especially those that banned idolatry.

As foreign conquerors imposed their pagan ways on the Jewish people, the Zealots sometimes turned to violence. One such offshoot of the Zealots was the Sicarii, or daggermen, a group of assassins who tried to cast off Roman rule. Their tactic was to mingle in crowds during festivals, slip up behind a victim, then kill him with their Sicari or short curved knife. The effect was a reign of terror that disrupted the Roman government.

As a Zealot, Simon once lived his life on the opposite end of the spectrum from Matthew. Matthew, a Roman sympathizer hated by the Jews because he was a tax-gatherer, was despised by the Zealots of his day. Whereas Simon (the tax hater) once might have considered a dagger for Matthew (the tax collector), later he became a compatriot of Matthews, spreading the gospel of Jesus Christ to the remote corners of the world.

Here we can appreciate the beauty of the Christian church.

Coming together as a people of every possible race, political background, nationality, and personality, Christians rise up to form a church that is alive with love for one another.

Each member becomes a servant of the master, Jesus Christ. The miracle of joining twelve men together with such opposite natures and personalities is mirrored in the miracle of an entire Church that spans the world.

The Zealots were angry people. It kind of came along with the territory. And Simon was probably an angry person too.

But Jesus had replaced that anger with love. We do not know the circumstances surrounding his initial meeting with Christ, but we do know that it changed him.

It is also a possibility that he saw a possible earthly kingdom in Christ. But if he did, he wasn’t much different from many other followers. He just didn’t see the big picture.

I don’t know about you, but I don’t think I would have chosen a man with such strong political convictions against Rome and then chosen the apostle Matthew, who worked for Rome!

From a purely logical point of view, that would never work out. But Jesus had changed them. They were not the men that they used to be.

How many of us would have disliked each other before we met Christ, and yet we are now bound together in our love for Jesus? We are family now!

Nevertheless, I still wonder if they ever talked about politics. That would have been an interesting discussion to hear!

The Lover of Purpose

I mentioned that the Zealots later evolved into a group of assassins who preferred to silently kill with the dagger.

The first-century writer Josephus recorded this in his historical records, The Wars of the Jews. He also wrote that the Zealots would just as soon kill a Roman as look at him.

We would refer to the Zealots as fanatical religious terrorists today. Their passion for their nation drove their hatred for Rome.

But when Simon, the religious terrorist, met the Lord Jesus Christ, all that hatred melted away, and all that was left was his fervent passion.

Then, Jesus took that passion, enhanced it, and focused it on a higher purpose – no longer a patriot of Israel but a servant of God.

This disciple with a killer instinct, this man who was involved in organized criminal activity and sedition, became a new person, zealous for Christ – chosen to be an apostle. If there is one thing that can be said about Simon, he was certainly not apathetic!

A Lover of His Nation

There were actually quite a number of political groups in the time of Christ. The Bible mentions four specifically. One of the most mentioned in the Bible is the Pharisees. They were super-committed to keeping the whole law. They would not associate with anyone they thought was not completely in sync with their way of thinking. They disliked the Roman Empire because of their many gods and their wicked lifestyle. But their form of resistance was passive-aggressive.

Another group was the Sadducees. They were typically from rich and affluent families. They didn’t believe in the supernatural aspects of the Scriptures. This group wasn’t as serious about the law and probably because so much of it was laced with supernatural events that they just couldn’t accept. They didn’t really mind the Romans as long as they got to keep their own place and position. So they offered no resistance to the Roman occupation at all.

Then, the New Testament mentions a third group that was very political in nature – the Herodians. These people looked favorably toward the Herods’ rule, they liked Greek culture, and consequently, they didn’t mind the Romans at all. They got along with the Sadducees but didn’t care for the Pharisees. They especially didn’t agree with the Zealots.

In some versions of the Bible (Amplified Bible), he is called Simon the Cananaean.

To confuse things further, Bible scholars argue over whether Simon was a member of the radical Zealot party or whether the term simply referred to his religious zeal. Those who take the former view think Jesus may have chosen Simon, a member of the tax-hating, Roman-hating Zealots, to counterbalance Matthew, a former tax collector, and employee of the Roman empire.

Those scholars say such a move by Jesus would have shown that his kingdom reaches out to people from all walks of life.